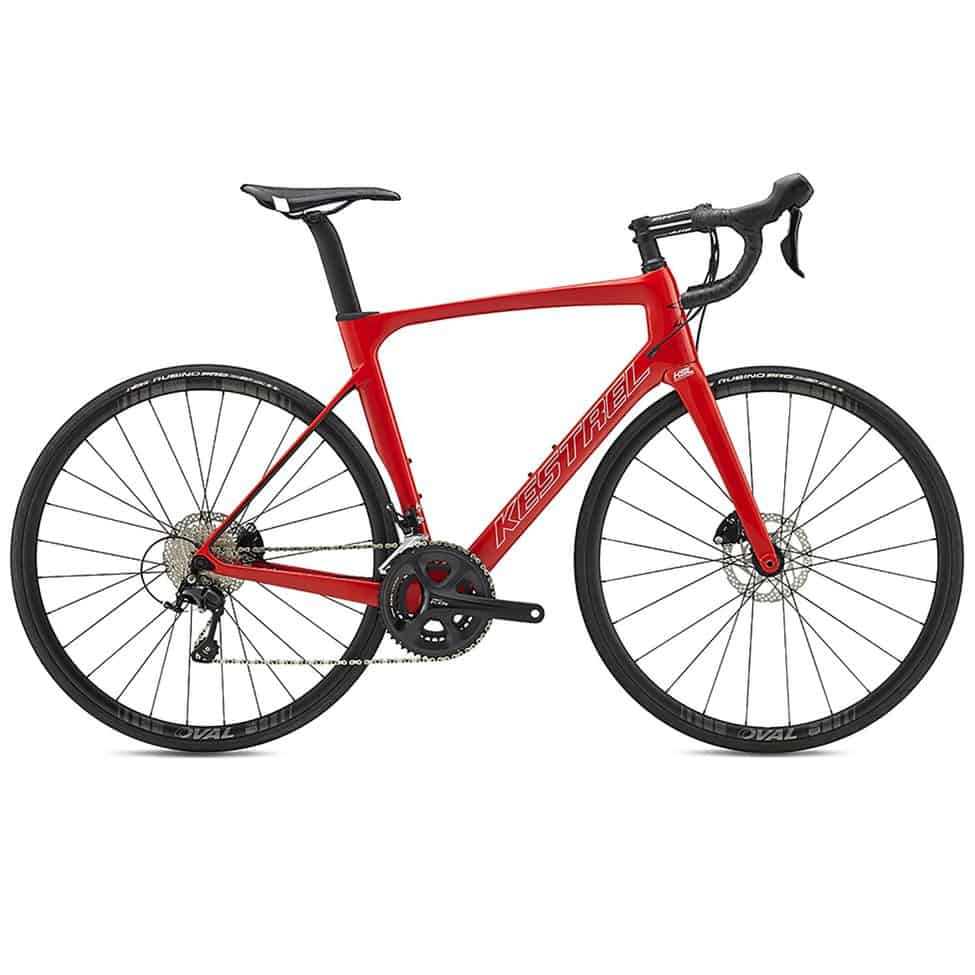 It's particularly appropriate for gran fondos (a 75+ mile event), group rides, and quick runs. Here's the rest of what you should know about this model.

The RT-1000 has a relatively straightforward set of specifications.

As with all variable-size bikes, getting the correct frame size is an important part of maximizing your performance. If you don't know which frame is appropriate for you, you should get measured at an authorized dealer.

The 2016 model uses Shimano 105 STI brake levers on a Tektro R540 Dual Pivot brake set. The 2017 model switched over to the Shimano Ultegra system, which is a somewhat better tier of products.

That said, both brake types are suitable for the kinds of events the RT-1000 is meant for, and you're not likely to notice a difference unless you get into a seriously competitive event.

The Shifters follow the same upgrade path as the brakes. The 2016 model of the RT-1000 uses an 11-speed Shimano 105 STI shifting system, while the 2017 models and onwards switched to the 11-speed Shimano Ultegra shifters instead.

The rims are sized to fit the Oval Concepts 527, 700c, 18/24H wheel systems. These are meant for standard tires, rather than the more advanced and durable tubeless systems, which is something you may want to keep in mind if you're planning on a long-distance run.

The 2016 model uses Vittoria Zaffiro Pro Slick 700 x 25c folding tires, which are reasonably well-reviewed but may be out of stock outside of certain specialty retailers. Expect to change to a different type of tire once the first set wears out.

Alternatively, given the low stock, you may receive different tires when you first order the bike.

The 2017 model switches over to Vittoria's Rubino Pro series, an all-round tire that's suitable for most terrain but doesn't offer the pure performance of a dedicated tire. If you're focused on doing well in a gran fondo, we highly recommend switching your tires to something more appropriate for the event.

Prices for the Kestrel RT-1000 vary. In addition to the 'main' models described above, the RT-1000 has several variations available from dealerships, mostly relating to the overall system (Shimano 105, Ultegra, or Dura-Ace) installed. MSRP varies around the $2000 mark.

If you are shopping on a budget, you may want to check out the Talon, selling for around $800 cheaper than the RT-1000.

That said, since the RT-1000 has been replaced by the RT-1100 (a slightly better machine), many retailers are interested in offloading their stock of the RT-1000 before it gets too old to sell. If you search around, you can realistically expect to find a discount of $100 or more, even on the newer 2019 models. We don't recommend paying full price for these machines, especially since good discounts are easy to find.

(However, you'll definitely want to check and be sure you're ordering the right size. Forgetting to do this could result in worse performance for your money.)

One of the things we like most about this series is the variety of frame sizes. Six different frames is on the high end, and it helps to ensure you get the best possible performance. Other things we like include:

Despite the variety of sizes, Kestrel doesn't provide easily-accessible information to help you determine which size is the best fit.

Accordingly, the only way to know for sure is to visit a professional dealer and get measured. If you need to do this, we strongly recommend not telling them that you're looking to buy. Instead, make it clear that you're just trying to figure out your size so you can know more about your options.

Also, this bike does not have race geometry - the slight curve puts it a little on the ugly side, even. This bike performs well enough over long distances, but it's not a bike designed for beating the crowd. At this price range, 'decent' really isn't good enough, though the available discounts mean better performance for the same price as some of its competitors.

Other things we disliked include:

The Kestrel RT-1000 comes in a wide variety of models, but the biggest decision is which braking and control system you want to have. This bike offers 105, Ultegra, and Dura-Ace systems from Shimano, and these are distinctly tiered systems (with Dura-Ace at the top).

There's about a $1000 difference between the highest and the lowest models, which is a large spread but definitely not as wide as some other bikes. However, since this isn't a bike meant for winning competitions, we don't recommend going for the best.

Instead, we think it's better to pick up a Shimano 105 variant and use some of the money you save to change the seat and the tires. In particular, anyone interested in a gran fondo or other long ride should get durable, long-distance tires.

The Kestrel RT-1000 isn't the newest bike from its manufacturer, but it's still a solid, long-distance road bike.

If you're looking for something to let you participate in long-distance - without worrying too much about winning - take a look at this machine.